Forging Into The Future Of Welding. Still a Dangerous Job?

You are here:
August 16, 2019Leave a commentNews and EventsBy Quiet Apple 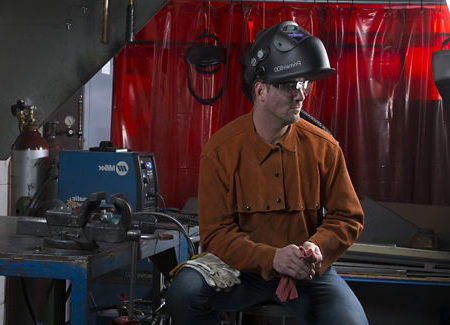 Welding seems like a tough profession, isn’t it? But despite its reputation, it is still sparking interest in the younger generation with a passion for metal fabrication.

20-year old Chandler Vincent is “one of the most skilled and decorated welders on the planet”, according to the American Welding Society. Chandler opened his own welding business at 16, earned a two-year welding degree at UBTech and won the 2017 WorldSkills Competition in Abu Dhabi. An impressive resume, right?

Despite the long-standing stereotype that manufacturing careers like welding are low-paying, dead-end, grunt-work jobs for uneducated people, market demand is on the rise.

There is increasing demand from companies looking to hire qualified workers. This cost-effective trade is still widely used in manufacturing and construction to efficiently fuse metals and alloys for a plethora of objects, from commercial and industrial machinery, to motor vehicles and submarines.

80 % of construction companies report difficulty finding qualified workers to hire, as a recent study by the Associated General Contractors of America (AGC) states.

As a result, vocational and trade-based schools are opening their doors to young undergraduates. Newly certified welders enjoy guaranteed job placements and salaries sometimes on par with newly graduated engineers. The median annual wage for welders, cutters, solderers, and brazers was $40,240 in May 2017, according to the Bureau of Labor Statistics.

“For the life of me I don’t know why we stigmatize vocational education,”

Despite attractive job offers, there aren’t enough people on the market with this sought-after skill set.

The American Welding Society Estimates a 290,000 Job Deficit in Welders by 2020.

This lead some manufacturing companies to consider automation and wearable technologies. One of the most tested innovations is the robotic exoskeleton, designed to serve a wide range of applications.

In mechanized welding, defined by the AWS as “welding with equipment that requires manual adjustment of the equipment controls in response to visual observation of the welding, with a torch, gun, or electrode holder held by a mechanical device”, the welder’s role is limited to adjusting the equipment controls after overseeing operations. Mechanized welding has multiple health & safety benefits including reducing worker fatigue, injuries and increasing overall worker productivity.

So, Why Aren’t There More Welders?

Welding is still considered a labor-intensive and risky profession. Welders spend most of their days in dark, smoky environments, exposing themselves to serious respiratory and eye hazards.

In 2017, welding fumes have been classified as a Group 1 Cancer-Causing Carcinogen by the International Agency for Research on Cancer (IARC)[1]. This means there is “sufficient evidence in humans” that welding fumes cause lung cancer.

This health hazard affects a significant number of workers. In the US, roughly half of a million workers perform welding activities, according to the US Bureau of Labor Statistics. [2]

The amount and composition of fumes and gases affecting welders depend on the type of welding work performed.

Did You Know There Are Over 30 types of welding?

Factors that influence exposure include the type of rod, filler metals, base metals, coatings, contaminants, as well as the quality of ventilation and respiration protection.

For instance, welding mild steel generates fumes that contain iron, manganese, and silicon. An excess of manganese can negatively influence the central nervous system, resulting in coordination problems, speaking difficulties, and tremors in the arms and legs.

Protection Comes First, Right? Or Does It?

Traditionally, occupational respiratory illnesses have been neglected when compared to more visible physical injuries. One reason is the long latency of the disease. Welders may not show any clear symptoms until they have been exposed to harmful pollutants for years.

And, as with most protective equipment, comfort has become more important than safety. There is still a tendency among workers to either not wear RPE or not wear it correctly; for example, workers prefer loose masks that are more comfortable to wear.

Furthermore, 50% of all respiratory protection used does not offer the wearer the level of protection which it was designed for because it is not a perfect fit[3]. For example, beards are known to prevent the RPE to seal the user’s face completely[4].

The Effectiveness Of Any Ultimately PPE Depends On The Worker.

Fortunately, new safety innovations are being developed alongside new welding gear to ensure hazard-free environments. For instance, worker helmets are becoming lighter and more comfortable with each version.